Author’s note: I reached out to a respected expert on gun control statistics, Dr. Gary Kleck, professor of criminology at Florida State University.  He was kind enough to send me the chapter The Great American Gun Debate:What Research Has to Say  from The Criminal Justice System, 10th edition, Edited by George F. Cole and Marc G. Gertz. Wadsworth. (Published January 2012). [Note: this paper had been hacked at one point and nasty, unrelated stuff added, I'm working on a new link.]   He also sent me a copy of National Vital Statistics Reports Volume 60, Number 3  which is the final report for 2009 which he says “provides the most recent final mortality data, showing numbers of deaths from all causes, with separate counts for gun deaths.”

Update: 11/21/14 (revised 10/4/15 and 6/12/16): The problem isn't guns, it's mental health, insane people will do insane things. Criminals don't follow laws. If someone is going to commit murder, a crime that has the death penalty/life imprisonment, do you really think gun laws will deter them? The way to prevent these types of incidents isn't to regulate or ban guns, it's to help identify and treat those with mental illness who are a danger to themselves and others.  The people are the problem, not their weapons of choice.

"Mental health is still not adequately diagnosed or treated in the United States, and especially not among young people...not delivered in a very effective manner.”

Updated: 1/1/13: At the risk of making this insufferably long, I have added one more video that I think needs to be here. It is found underneath #6.

Last week we witnessed the horrible shootings in Newtown, Connecticut. I am deeply saddened and brought to tears by the deaths of the 27 people including 20 small children.  While I would prefer not to speak about gun control while people are mourning the loss of their loved ones, there are those who immediately and disgustingly took advantage of the situation to politicize it and tout their gun control agenda.  Therefore, I must respond to them with what I know is true:

1. Gun control doesn't work.  Connecticut has strict gun control laws and that did not prevent the tragedy in Newtown.

2. Guns are not the problem, evil is the problem and evil is what we must fight, not guns. Everyone has a propensity for evil. There are ways to minimize (not eliminate) the ability of vil to take a foothold.

3. The public school systems are failing our children. Schools don't know what to do with smart kids who don't fit the social 'norms' even though they are required, by law, under The Individuals with Disabilities Education Act (IDEA) , to identify and "provide early intervention, special education and related services to infants, toddlers, children and youth with disabilities." This includes not only those with physical disabilities, but also mental and emotional disabilities.  School systems are failing to do this.

4. Most importantly, our children must not be left unprotected.  Parents are calling for students to be protected by armed security/police as is the case in Orange County, FL.  It is not feasible for police to be posted permanently at schools.  What is feasible and what would be the best way to protect our children is volunteer teachers/school staff properly trained and armed like they do in Israel.
We train teachers and staff how to perform first aid/CPR and use an AED to save kids, why not train them to use firearms? this is just another way to protect our precious children. 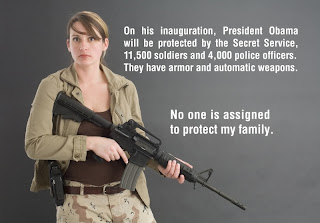 5. I abhor the term "assault rifle." Anything can be used in an assault. There is a specific type of rifle that is called an "assault rifle," it is fully automatic illegal for most people other than military or police and a few select people to possess.  Media, either intentionally or because they are ignorant, mistakenly call rifles used in the recent crimes "assault rifles."

Here is an explanation:

6. What does research and statistics say about gun control?


In the wake of the Colorado theater shootings and the tragic shooting in Newtown, CT, many people have called for stricter gun control laws, while others stand by the second amendment right to own and posses guns.  Those who want stricter control believe it will prevent deaths, many gun advocates state guns help prevent injury and death.  I was interested to find out more information in two areas, the first being the comparison of guns used for violence versus gun use for protection and secondly, mortality rates related to gunshot wounds as compared to mortality rates by other mechanisms.

Choose your own crime stats:


“Perhaps what is most striking about the patterns of gun ownership in the US is that ownership is generally highest in those groups where violence is lowest.” (Kleck 1997, Chapter 3).  “It is well known that guns are used in many violent crimes in the US. [However] The best available evidence indicates that guns are used by victims in self-protection considerably more often than crimes are committed by offenders using guns.  For example, victims used guns defensively about 2.0-2.5 million times in 1993, compared to fewer than 600,000 violent crimes committed by offenders with guns (Kleck and Gertz 1995).” 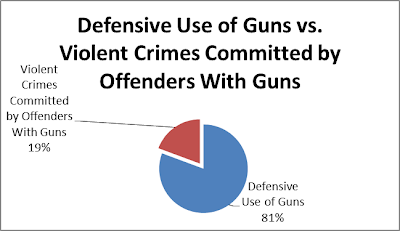 “Defensive gun use is effective in preventing injury to the victim and property loss.  Research based on interviews with large nationally representative samples of crime victims consistently indicates that those who use guns during crime incidents are less likely to be injured or lose property than those who either adopt other resistance strategies or do not resist at all. These effects are usually produced without shooting the gun or wounding a criminal -  only 24 per cent of gun defenders even fired the gun (including warning shots), only l6 per cent tried to shoot the perpetrator, and at most 8 per cent wounded the offender (evidence summarized in Kleck and Kates 2001, Chapter 7).” 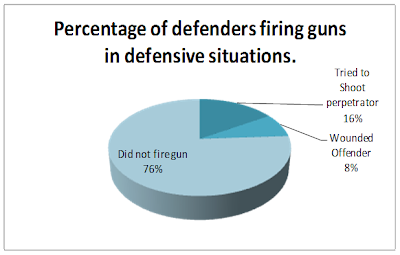 “There is also evidence indicating that some criminals may be deterred from making some criminal attempts in the first place by the prospect of victim gun use against them. Criminals interviewed in prison indicate that they have refrained from committing crimes because they believed a potential victim might have a gun, and crime rates have dropped substantially after highly publicized instances of prospective victims arming themselves or being trained in gun use, or victims using guns against criminals. (research summarized in Kleck and Kates 2001, Chapter 7).”


Information I had not even considered, “that when criminal aggressors possess guns in a crime incident, they are substantially less likely to attack and injure their victims in the first place. At least nineteen studies have found that offenders possessing guns are less likely to injure their victims than offenders with other weapons or no weapons. The explanation appears to be that possession of a lethal weapon enables aggressors to intimidate victims without actually attacking them, in crimes where the offender’s goal is not to kill the victim.” Kleck 2011

Many gun control proponents state that having stricter gun control laws that restrict who can purchase guns will prevent criminals from obtaining guns.  Studies show that most criminals do not obtain their guns from a conventional retail dealer of guns.


Another question that has surfaced is: why do people focus more on gun injury related deaths? Why guns when more people have died from poisoning and motor vehicle accidents individually and followed closely by falls? There are restrictions on some types of poisons, but that didn’t prevent 41,592 deaths by poison in 2009. There are even less restrictions on motor vehicles which caused 34,485 deaths in 2009.Both of these cause more deaths than guns. All of these can be used by in the commission of murder.

According to: National Vital Statistics Reports Volume 60, Number 3 December 29, 2011Deaths: Final Data for 2009 (Table 18) in 2009, a total of 177,154 deaths were classified as injury related Four major mechanisms of injury in 2009— poisoning, motor-vehicle traffic, firearm, and fall— accounted for 75.1 percent of all injury deaths. 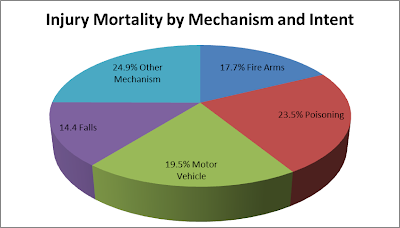 Why then are guns singled out as needing restriction or banned? Could it be, perhaps, a matter of politics? Though there are gun proponents and gun control advocates on both ends of the political spectrum, it seems as though it is mostly the liberals and progressives that want gun control and the conservatives and moderates that defend the second Amendment right to bear arms. That this topic has become entrenched in people’s political belief system, it is difficult, but not impossible, for people’s minds to be changed on the topic of gun control.


Research shows that gun control will not help prevent gun related crimes, nor will it prevent people from obtaining guns. In fact, stricter gun control would cause an increase in crime, increase gun related crime, and victim injury/death.
In response to the question:  What is the defense of those that would try to discredit this study?

Dr. Kleck responded: "I have thoroughly rebutted all of the criticisms of my and others' survey estimates of the frequency of defensive gun use in one convenient source, a chapter in the 2001 book Armed, by Gary Kleck and Don B. Kates."

Dr. Kleck stands by the data in the study. 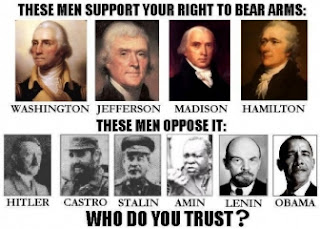 Kleck, Gary, and Marc Gertz. 1995. “Armed resistance to crime: the prevalence and nature of self-defense with a gun.” Journal of Criminal Law and Criminology 86:150-187.